What three words would you use to use to describe your photography?

What does photography mean to you?

Photography is a language. A series of unspoken words.

Is there a personal experience which influenced your creativity?

I think most of my creativity or inspiration comes from past experiences, but there is no memory in particular which it is drawn from. The earth is full of such crippling beauty- and I think my overactive mind is constantly absorbing simple and intricate imagery; like taking note of the way dew sits on top of grass. The act of observing all that is around me is stimulating. Granted, there are certain periods of my life in which I was deeply affected by a situation and my artistic interpretation of those times are recognizable in a certain body of photographs. It’s an ongoing and mostly unconscious act, though.

Do you have a favourite location where you like to shoot?

There is a tall white spruce conservation area near to where I grew up. Many of my photographs were taken there, as I used to spend hours a day sitting underneath the trees and observing the way that light would peak through the trees.

What’s the last thing you think about before you go to sleep?

My thoughts are usually muddled with anything and everything.

Is your creative process relatively strict, or are you quite spontaneous?

As much as I would like to say that my process has a defined structure, it is indeed fairly spontaneous.

When I am working on assigned projects or putting together work for exhibitions, I usually fall into some kind of trance of (over) productivity which usually consists of scattered thoughts and attempting to do too many things at once.

During my shoots, I will have a general idea of what I am hoping to achieve, but so much can change in such a short period of time. I generally try to work at a pace that feels healthy or comfortable to me, and I leave a lot up to environmental/situational factors and how I am feeling ‘during the moment’..

Do you ever create hidden meaning or messages in your work?

I often used to. I suppose I still do, just not with as much frequency. I will sometimes create images to communicate with someone, or something, or to add a voice to a shared/mutually experienced situation.

Where in the world do you feel most inspired and content?

I feel most inspired when I am in search of that place that is supposed to make me feel content.

I haven’t found that place yet, but I have an idea of where it is.

I generally tend to gravitate towards forests or bodies of water. Being surrounded by concrete starts to get to me after a while, and I often begin to feel defeated by the dull hum of cities.

Is there a particular feeling you would like to conjure up in viewers of your work?

I just want to be honest.

I want other people to envision their own figures and forms when they look at my work- for them to construct their own worlds.

Who would you cite as artistic influences and why?

There is an endless list of photographers, artists, musicians and writers who I draw inspiration and creative energy from. I will attempt to at least give a few photographers names…but, this is difficult because there are many new contemporaries whose work I follow so closely… Diane Arbus, Duane Michals, Cindy Sherman, Francesca Woodman, Meatyard, Joel Peter-Witkin, Sally Mann, Bresson.

Do you have a photograph which you feel particularly attached to? 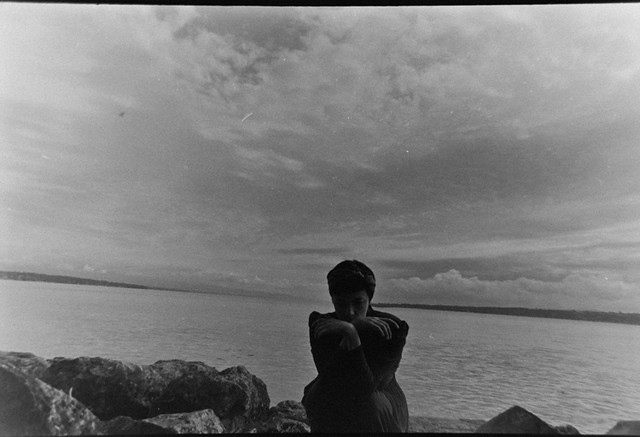 or maybe this one

What are your thoughts on technology? Do you ever find it all too much and feel the need to escape the buzz?

As much as I am grateful for being able to stay in touch with my few very good friends who live at such great distances, technology feels like some kind of imperious weight that is constantly acting as some kind of blockage. The need to stay connected to all which is and which isn’t is too overwhelming for me. It masks our true perceptions of reality and communication. I find myself attempting to escape it often.

Have you ever felt creatively blocked, and if yes, how did you overcome it?

I pass through blocks all of the time. Whether it is the act of creating something new altogether or the act of having the drive to successfully carry a project out that has been in incubation for far too long. It is an incredibly frustrating process but it has become somewhat natural for me. I have started to use this ‘downtime’ as a time for personal reflection; truly questioning what it is I am doing and what needs to be done in order to progress. It’s a period of slow, gradual growth.

Waiting it out is really all that can be done. Travelling to or exploring new environments usually helps me along.

How has your relationship with photography developed over the years? Did you ever want to put the camera down and never pick it up again, or have you always felt as if you were missing a limb if it wasn’t there?

After a short (or extended) period of time spent away from my camera, I do often feel as though ‘something is missing’… tying into my previous answer: there have been quite a few ‘extended leaves’ from my work. These are crucial for growth and reflection. I always come back to my camera.

What do you see when you close your eyes, and think about where you would like to be in ten years time?

I see a log cabin in the woods. Near the sea.

You have twenty four hours to live. How would you spend your day?

Is it just I who will be parting ways with the earth? Or is it the end for all of us?

Regardless… I would probably drive or fly north, to the to the highest accessible point I could find; but not somewhere that I have been before. I would maybe find a body of water nestled in between the mountains? I would appreciate the company of those whom I love.

Where can we find you and your work?

You can find me anywhere between Montreal and Toronto, for now.